The U.S. economy is growing at the fastest pace in five years, American companies are earning record profits and unemployment is at the lowest level in almost half a century.

So why are Wall Street and some economists suddenly worried about a recession?

Financial markets in particular have been signaling that trouble is brewing. The Standard & Poor’s 500, which tracks the biggest U.S. companies, has plunged about 6 percent since Dec. 4 because of worries about trade and slowing global growth. And a key bond metric that has presaged every recession since 1960 is warning another may be on the way. 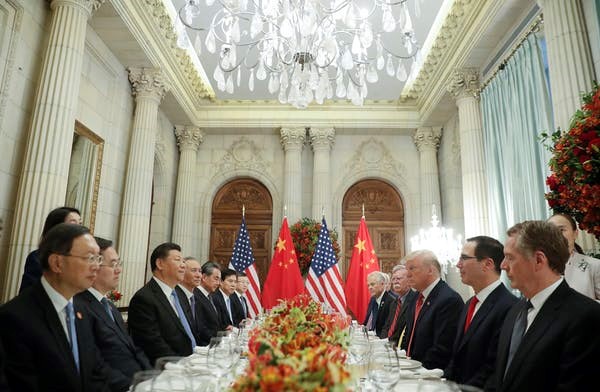 As an economist who teaches and conducts research in international trade and finance, I see three credible concerns driving the worries.

One major issue is the ongoing trade war between the U.S. and China. The U.S. has imposed tariffs on about US$250 billion of Chinese imports – almost half of all trade with the country – in what I consider a misguided effort to get Beijing to buy more American goods and grant greater market access to U.S. companies. U.S. President Donald Trump has threatened to apply duties to all imports if his demands aren’t met.

In turn, China has put tariffs on $60 billion of American goods. This is bad for the U.S. economy because tariffs tend to reduce trade, slowing growth and making goods more expensive for consumers. A just-released study from the right-leaning Tax Foundation, for example, found that Trump’s tariffs have so far lowered incomes by an average of $146 a year for taxpayers who earn $27,740 to $43,800 and have reduced U.S. hiring by the equivalent of 94,300 full-time jobs.

On Dec. 1, markets initially breathed a sigh of relief after Trump and Chinese President Xi Jinping reached a 90-day truce in the war, giving the two countries time to try to work through their differences. The optimism faded quickly, however, after conflicting reports emerged about what the two leaders actually agreed to and Trump called himself a “tariff man” in a threatening tweet. 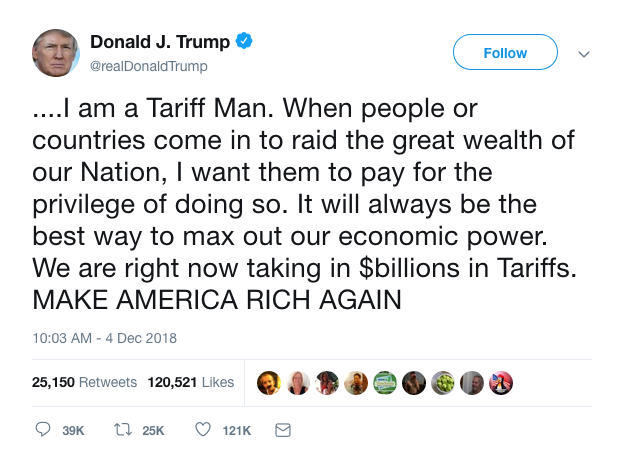 The arrest of a Huawei official in Canada on a U.S. request further risked disrupting the tentative ceasefire, showing how fragile the Trump-Xi deal is and how easily the situation could return to a war footing.

A second worry is slowing global growth. In Europe, the combined economies of the 19 countries that use the euro barely grew in the most recent quarter – the lowest in four years – and economists are warning recession may be coming to the continent. At the same time, Britain’s impending and potentially chaotic exit from the European Union is expected to hammer its economy.

And Trump’s trade war and tariffs – which are not only squeezing the Chinese economy but many other countries such as Canada, Mexico and members of the EU – are making matters worse.

All these challenges convinced the International Monetary Fund to lower its global growth forecast for 2019 from 3.7 percent to 3.5 percent and warn of increasing “downside risks” as a result of the tariffs and other problems. A global growth slowdown means foreigners will buy fewer American-made products, which ultimately hurts the U.S. economy. 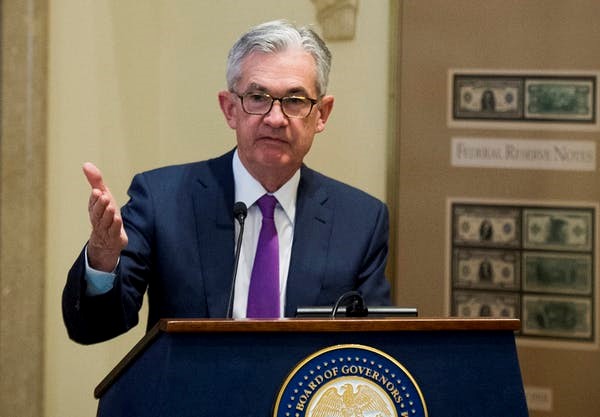 These problems are serious enough that they’re even rattling the Federal Reserve. Until now, the U.S. central bank has been on a deliberate path of gradually raising interest rates on the premise that the American economy was fundamentally strong and would continue to grow. As recently as October, Fed Chair Jerome Powell described the economy’s low unemployment and subdued inflation as sustainable and “not too good to be true.” 1

That may no longer be the case. Wall Street traders, who previously had some faith that the Fed will follow through on its plan to raise rates several times in both 2019 and 2020, increasingly don’t expect even a single rate hike next year. Since the central bank typically raises rates when the economy is strong, that suggests they believe it has serious concerns about its trajectory.

The resulting unpredictability over what the Fed’s going to do next has shaken investors and markets and contributed to fears about an impending recession, which is typically defined as two straight quarters of declines in overall economic activity. We may learn more on Dec. 19, when the Fed is expected to raise interest rates for the ninth time since 2015.

So is a recession imminent?

The current expansion has lasted since the official end of the Great Recession in June 2009, or almost nine and a half years. If it lasts seven months more, it’ll be the longest expansion in at least 160 years.

Because of the cyclical nature of business activity, there is no question that a recession will inevitably occur at some point in the future. Whether it’ll happen next year or further down the road is hard to predict. But you could argue, perhaps we’re due.

MCF has published this article with permission from Financial Media Exchange.

Please remember that past performance may not be indicative of future results.  Different types of investments involve varying degrees of risk, and there can be no assurance that the future performance of any specific investment, investment strategy, or product (including the investments and/or investment strategies recommended or undertaken by MCF), or any non-investment related content, made reference to directly or indirectly in this newsletter will be profitable, equal any corresponding indicated historical performance level(s), be suitable for your portfolio or individual situation, or prove successful.  Due to various factors, including changing market conditions and/or applicable laws, the content may no longer be reflective of current opinions or positions. Moreover, you should not assume that any discussion or information contained in this newsletter serves as the receipt of, or as a substitute for, personalized investment advice from MCF.  To the extent that a reader has any questions regarding the applicability of any specific issue discussed above to his/her individual situation, he/she is encouraged to consult with the professional advisor of his/her choosing.MCF is neither a law firm nor a certified public accounting firm and no portion of the newsletter content should be construed as legal or accounting advice.  A copy of the MCF’s current written disclosure statement discussing our advisory services and fees is available upon request. If you are a MCF client, please remember to contact MCF, in writing, if there are any changes in your personal/financial situation or investment objectives for the purpose of reviewing/evaluating/revising our previous recommendations and/or services. Please click here to review our full disclosure.